The project comprises of following : 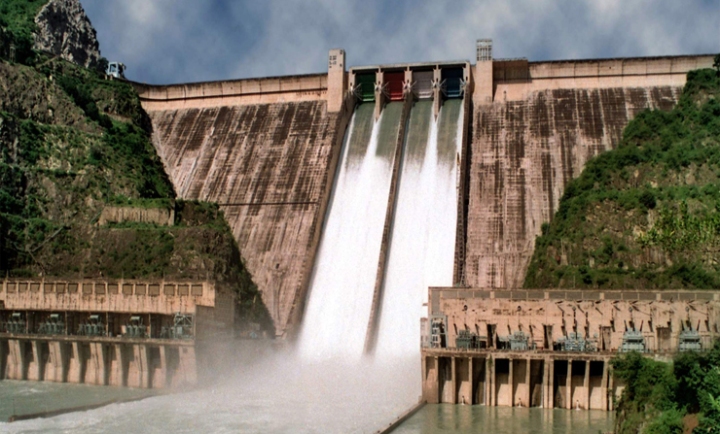 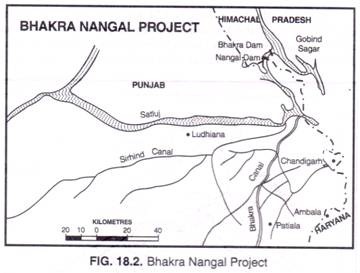 There was a gorge – a narrow valley having steep slope and a stream flowing thro1ugh it, near Bhakra village, in Bilaspur District of Himachal Pradesh. The Gorge is between two major hills in the locality  Naina Devi ki dhar and Ramgarh ki dhar through which river was flowing. Thus the Bhakra Dam site was finalized. The village got submerged in the storage water of Dam.

Nangal dam is another dam downstream of Bhakra dam. Sometimes both the dams together are called Bhakra-Nangal dam though they are two separate dams.

The water flooded from Bhakra Dam is actually controlled and maintained by Nangal Dam.

The Bhakra Dam is at 741 ft (226 m), is one of the highest gravity dams in the world (compared to USA’s largest Hoover Dam at 743 ft). The 166 km² Gobindsagar Reservoir, named after Guru Gobind Singh, is created by this dam which is the third largest reservoir in India the first being Indira Sagar Dam and second Nagarjunasagar Dam.

There is a fall of 70 metres in elevation within a distance of 64 km. Its main function is to turn the turbines of power houses located below the Nangal Dam but it also supplies water to the Bhakra irrigation canals.

The power generated at Bhakra Power houses is distributed among partner states of Punjab, Haryana, Rajasthan, Gujarat and Himachal Pradesh and also supplied to common pool consumers like National Fertilizers Ltd. and Chandigarh.

The dam was part of the larger multipurpose Bhakra Nangal Project whose aims were to prevent floods in the Sutluj-Beas river valley, to provide irrigation to adjoining states and to provide hydro-electricity.

The concrete and other building materials have been used for the completion of this project is more than double the material used to build the grand pyramids of Egypt.

Seventy million man – days have been used to construct the canals of the Bhakra-Nangal project.

The amount of earth has been excavated for constructing the canals of this project is enough to construct a 6 metre wide road at 1 metre elevation from New Delhi to New York.

Dam became a tourist spot for the tourists during later years because of it huge size and uniqueness.

No wonder this project has got so much importance!